GSC Logistics scores success with imports at Port of Oakland As might be expected, Andy Garcia, GSC’s chairman, and Scott Taylor, its president and chief executive officer, are big boosters of the ports of Oakland as well as Seattle and Tacoma, where GSC began operating in 2011.

But they also are aware how fragile the reputation of a port can be and how quick beneficial cargo owners may be to shift volumes elsewhere if they are concerned about the reliability of their supply chain. That’s why they have become outspoken opponents of a proposal to locate a baseball stadium on property in the Port of Oakland along the Oakland Estuary.

“We’re very excited about the efficiencies that this port (Oakland) has been able to achieve over the last few years as we’ve instituted night gates, as we’ve instituted robust appointment systems. There is a renewed confidence and cooperation between all the stakeholders at the port,” including organized labor, the vessel lines, terminal operators, motor carriers and freight forwarders, said Taylor.

“A lot of that credit goes to Chris Lytle,” Taylor added. Lytle retired as executive director on July 19, and a search is on for his successor. Garcia and Taylor applauded his establishment of a port efficiency task force that brought port stakeholders together to find ways to improve operations.

Dual transactions can be performed at Oakland container terminals in 90 minutes, said Garcia, adding that the port’s terminals all have peel-off programs in which a group of truckers can rapidly evacuate a block of containers.

“That is something that is now beginning to be introduced up in Seattle and Tacoma,” Garcia said.

A long-sought goal of the Port of Oakland has been the addition of a “first call” service from Asia. Today transpacific services call either the Port of Los Angeles or Port of Long Beach before heading north to Oakland. If a ship carrying imports from the Far East first called Oakland, that could be a big boost to the port as well as their company, they said.

Organized in 1988 as a public warehousing company, GSC Logistics moved into the drayage business in 1999 and today handles about 12% of all imports in the Port of Oakland.

“It would be great for the entire port, of course, but for our business it would be a windfall,” said Taylor. “It would probably increase GSC’s business by 10 to 20% almost overnight since we’re so heavily involved with the import community.”

You might expect the port’s overall balance of imports and exports might create plenty of opportunities for GSC to match imports with export loads rather than hauling empty containers back to the port. But Garcia said while it sounds like a good idea, it turns out to be a very difficult nut to crack.

“You have to have the container for the unique vessel line where the exporter is looking for an empty. It also has to coincide with the booking time frame that the exporter has set up with that container as to which day it must be at the terminal — so it can make the vessel, so it can be delivered overseas at destination,” Garcia said.

“This matching process is very difficult, and I would say it only works maybe 5, at most 10% of the time. And in the meantime, our importers want the containers as soon as possible because they have millions of dollars tied up in the inventories within those boxes. So they much rather we concentrate on delivering as many containers as possible … rather than trying to match export loads to their port containers.

Taylor said, “After all these years of improving the reputation of the port, we’ve come a long way. I really thought we were very close to getting a first port of call this year, maybe next year. Now with this talk about Howard Terminal, we might have taken a reversal on that subject. People might want to take a wait-and-see attitude.”

Playing ball. The Charles P. Howard Terminal formerly was used by Matson Line to load and discharge ships in its services to Hawaii and Guam. Today it is used by companies to park and stage trucks and store containers and chassis. A training facility for longshoremen is located there and the terminal also is used as a lay berth where ships and tugs can dock. Part of the terminal is expected to be removed when a turning basin in the port is expanded.

The future maritime use of the site is in question as the Port of Oakland Board of Commissioners voted unanimously in May to authorize entering into exclusive negotiations for up to four years with the Oakland Athletics over a plan to build a new ballpark at the waterfront site of Howard Terminal.

The GSC executives believe the Howard Terminal today serves an important purpose even if containerships are no longer regularly loaded and discharged there and say the need for space at the port will become more critical as ships get larger. They pointed to a recent study of San Francisco Bay Area ports by Tioga and Hackett Associates that indicates that without the Howard Terminal, the Port of Oakland could be near capacity or overcapacity under moderate and strong growth scenarios.

They also have serious safety concerns, noting that the proposed stadium site is located near the port’s heavy truck corridor.

“As Andy says, it’s almost like putting an amusement park in the middle of an assembly line. This place doesn’t stop — this is 24 hours a day, seven days a week. There is activity on the weekend —ships are coming and going,” said Taylor. “It is extremely concerning that large vessel lines might have to look at other alternatives if they can’t get their ships in and out because you’ve got kayakers or you’ve got party boats sitting here right outside our window in the estuary having a party.”

He and Garcia also worry that pedestrians could be hit by the freight and passenger trains that travel just outside the terminal and said they know of at least four such incidents since they moved their headquarters into the Port of Oakland near the Howard Terminal.

They are concerned that Oakland Mayor Libby Schaaf is supporting the exclusive negotiations for use of the Howard Terminal between the port and Oakland Athletics, but feel encouraged that the Oakland City Council “started to hear for the first time issues that we’re raising” when they spoke about their concerns during a meeting in July. 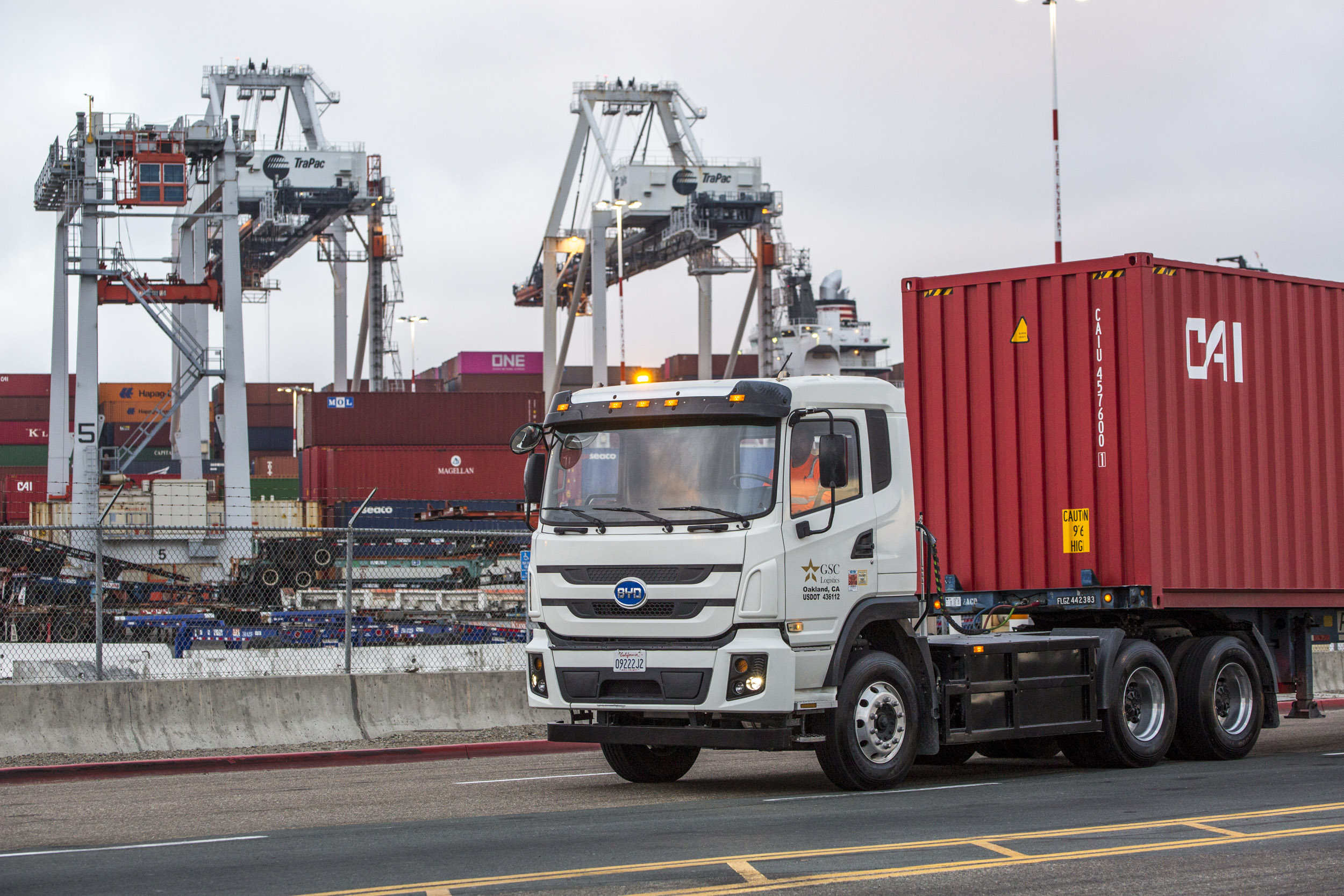 GSC has been operating a BYD electric truck for drayage in the Port of Oakland for nearly two years.

GSC has pioneered the use of electric trucks in the port. It acquired its first electric tractor from BYD Motors in November 2017 and is in the process of adding two more that it expects to be delivered in September and October, said Brandon Taylor, the company’s director of transportation. BYD is a Chinese bus manufacturer, but the tractors are manufactured at the company’s factory in Lancaster, Calif.

He said the electric truck is used for local port drayage, moving containers in and out of the container terminals, rail yards and container yards within the port. The first-generation tractor that the company has been operating has a range of about 100 miles, and the second-generation tractor is expected to have a 150-mile range.

Brandon Taylor, who is Scott’s son, said one issue the company has encountered is “weight of the tractor because of the batteries — it’s anywhere from 6,000 to 8,000 pounds heavier than a regular diesel sleeper tractor.”

That limits what roads the truck can operate on, and with a fully loaded container, “the battery can drain more quickly and the truck doesn’t have the torque to get it up and over steep grades,” he said.

The company intends to try making some longer drays with the new truck to see how it performs.

GSC has found the electric trucks to be reliable, and drivers like them because they are quiet and have a small turning radius.

But the electric tractors are expensive. The first generation was about $300,000, and the second generation will cost about $240,000. That’s nearly double the cost of a new diesel tractor and three times or more expensive than a used diesel tractor built after 2010. Grants from the California Air Resources Board and other organizations defrayed about 75% of the cost of the trucks.

“For these electric tractors to move beyond an intra-port service range and begin to be used in inland destinations, really the cost must come down considerably, be it through innovation, technology, new development,” said Garcia. “Otherwise the cost to customers who are receiving containers through electric tractors would be so high.”

And the GSC executives point out there would need to be thousands of trucks built and electrical infrastructure in the port to charge the vehicles.

It has a 15-acre site in the port where it can dray off containers and relay them between draymen taking containers in and out of the port’s terminals and truckers taking them to and from inland locations away from the port. It also has an 84,000-square-foot warehouse where it does consolidation/deconsolidation and transloading of cargo. From American Shipper If you only look at Los Angeles and Long Beach — the largest container import gateway in America — you’d think shipping congestion has drastically reduced. The number of ships waiting...

GSC Logistics/ August
Previous
Next
We use cookies on our website to give you the most relevant experience by remembering your preferences and repeat visits. By clicking “Accept”, you consent to the use of all the cookies.
Cookie SettingsAccept
Manage consent